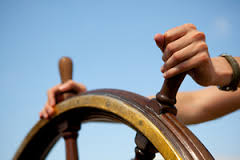 Behind the great tragedy of Saul’s life is a very interesting analogy—an analogy between Saul’s death and Christ’s death. At first glance we might say, “What in the world would we find common to both Saul and Christ?” Actually, there are six analogies worth noting.

Second, with Saul’s death it seemed that the adversary had won the final victory. When Christ died, it seemed as though the Adversary of our souls had won. He must have strutted all over the gates of hell declaring, “The victory is mine. I am the conqueror. The Messiah is dead.”

Third, Saul’s death paved the way for an entirely new plan of operation and ushered in David’s kingly line, which led to the Messiah. When Jesus Christ died, a whole new operation moved into action and set in motion our great salvation.

It is quite possible the Lord is saying to some Sauls who are in the process of living out that kind of regrettable life, “Now is the time to stop.” It is time to say, “Lord, don’t change sides, just take over.” We do, indeed, come before our Lord like sheep, not asking Him to take sides, but just to take control.