The parents were obviously weary from dragging their two energetic preschoolers through airports and airplanes, and now their final flight was delayed. As I watched the two boys running around the crowded gate area, I wondered how Mom and Dad were going to keep the little guys settled down for our half-hour flight into Grand Rapids. When we finally boarded, I noticed that the father and one of the sons were in the seats behind me. Then I heard the weary father say to his son, “Why don’t you let me read one of your storybooks to you.” And during the entire flight, this loving father softly and patiently read to his son, keeping him calm and focused.

In one of his psalms David declares, “As a father pitieth his children, so the Lord pitieth them who fear Him” (Ps. 103:13). The word pitieth refers to showing love and compassion. This tender word gives us a picture of how deeply our heavenly Father loves His children, and it reminds us what a great gift it is to be able to look to God and cry, “Abba, Father” (Rom. 8:15).

God longs for you to listen again to the story of His love for you when you are restless on your own journey through life. Your heavenly Father is always near, ready to encourage you with His Word.

God’s great love for His child is one of His greatest gifts.

A BIG THANK YOU TO THE LADIES AT VICTORY FOR MAKING FATHER’S DAY SPECIAL AT THE MANOR. 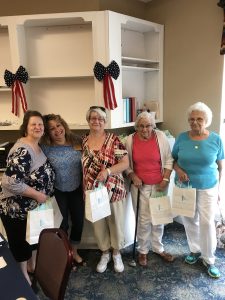 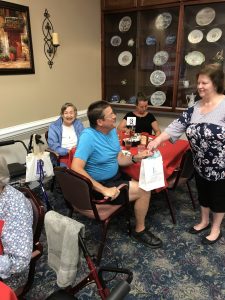 There are certain dreams I cherish that I’d like to see come true;
There are things I would accomplish ‘ere my working time is through;
But the task my heart is set on is to guide a little lad
And to make myself successful as that little fellow’s dad.

I may never get earth’s glory; I may never gather gold;
Men may count me as a failure when my business life is told;
But if he who follows after is a Christian, I’ll be glad,
For I’ll know I’ve been successful as that little fellow’s dad.
—Author Unknown