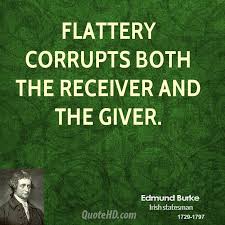 The Danger of Flattery
by Dr. Paul Chappell

“Say unto wisdom, Thou art my sister; and call understanding thy kinswoman: That they may keep thee from the strange woman, from the stranger which flattereth with her words.”

King Canute ruled over Denmark, Norway, and England more than one thousand years ago. A wise ruler, he worked diligently to make the lives of his subjects better. As is often the case, he was surrounded by those who sought to gain influence and prominence with him, and according to the ancient story, he grew tired of their continual flattery and determined to put an end to it. He ordered that his throne be carried out to the seashore and gathered his courtiers about it.

By the sea, the king asked his courtiers to repeat their flattery concerning his power and might, and they did. Canute then commanded the tide not to come in. Yet soon the waters were lapping around his legs as the tide did not heed him. According to one historian’s account, King Canute rose up from his throne and said, “Let all men know how empty and worthless is the power of kings, for there is none worthy of the name, but He whom Heaven, earth, and sea obey by eternal laws.”

Flattery is so effective because it appeals to our pride—we want to believe the wonderful things that are being said about us, even if we know that they are not deserved. False praise has led to the downfall of many Christians. This is especially true in the area of moral purity. Proverbs abounds with warnings about the words of the “strange woman” to guard those who are committed to remaining pure. Anyone who approaches you with flattery is attempting to get you to do something, and though it is not always the case, most of the time that something is not going to end well. Do not be swayed from following God by flattering lips.