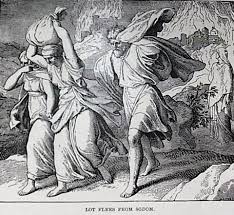 The Thing We Never Hear About Lot

I was recently reading in Genesis and I came across this verse:
And while, he lingered, the men laid hold upon his hand, and upon the hand of his wife, and upon the hand of his two daughters; the Lord being merciful unto him: and they brought him forth, and set him without the city. – Genesis 19:16
There are so many things that I learned from this verse right here. Here are a couple of the lessons.
First, we see our human nature. Lot was forcefully removed. I think that we often hear the story as “Lot left.” Not as “Two angels forces lot to leave the city.” They set him outside of it. We can see so many things about ourselves from this verse. Lot was warned. He knew full and well that Sodom was going to be destroyed. He had a conscience at some point because the New Testament tells us that he was a just man, but his conscious was so seared that he was satisfied in his sin. He was content to stay and be destroyed by his own stubbornness and love for sin. Don’t you think that we often do the same thing? We get so stuck in our sin. We are satisfied. We are content to stay in Sodom. It’s comfort, it’s constant exposure, it’s contentment in sin. But this brings me to the second point.
Second, we see God’s nature. God is merciful. We often don’t care enough about ourselves to remove ourselves from bad situations. But God does. He loves us so much that even when we are stuck in our own sin, He wants to help. So sometimes, he has to forcefully remove us from a situation. I can think of specific times in my life where God has done this for me. If you are a child of God, you can probably think of some too. It could be an ended relationship, an exposed secret sin, a humility check. You know. And sometimes, we’re tempted to be mad at God. Why would He do that to us? How could this ever be okay? Because of His love. God is so merciful to us even when we have no desire for His mercy.
Human nature versus God’s nature. What a contrast! I’m so grateful that my nature is not the nature of God. If it was, boy, would we be in trouble! But in spite of my sin and stubbornness, God is perfect. He is love. He is merciful.