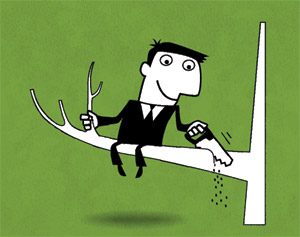 Ever fallen into a hole so deep you thought there was no way out? Ever been hit with a crisis that knocked you out? Is your life in despair, futile, empty? Consider the story of the guy who was jogging through a cemetery late one night.

In the darkness he fell into an open grave. He tried to climb out but recent rain had made the sides of the hole too slippery to climb. Finally he decided to give up and wait for daylight and hope somebody would come along to give him a hand.

A short time later another man, obviously drunk, was taking a shortcut through the cemetery and fell into the same grave.

He too tried to climb out but the walls were too steep and slippery, especially for a man in his condition. His efforts were to no avail.

Suddenly he felt a hand on his shoulder and a voice said, “It’s no use. You can’t get out.”

A wife asked her husband, “What do you like most in me, my pretty face or my youthful body?” He looked at her from head to toe and replied, “I like your sense of humor!”

A turtle is crossing the road when he’s mugged by two snails. When the police show up, they ask him what happened. The shaken turtle replies, “I don’t know. It all happened so fast.”

LYING DOG A guy spots a sign outside a house that reads “Talking Dog for Sale.” Intrigued, he walks in.

“So what have you done with your life?” he asks the dog.

“I’ve led a very full life,” says the dog. “I lived in the Alps rescuing avalanche victims. Then I served my country in Iraq. And now I spend my days reading to the residents of a retirement home.”

The guy is flabbergasted. He asks the dog’s owner, “Why on earth would you want to get rid of an incredible dog like that?”

The owner says, “Because he’s a liar! He never did any of that!”