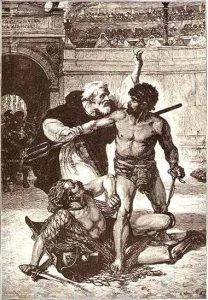 By the end of the 4th century, followers of Christ were no longer being fed to the lions for the entertainment of Roman citizens. But the games of death continued until the day one man jumped out of the crowd in a bold attempt to keep two gladiators from killing each other.

His name was Telemachus. As a desert monk, he had come to Rome for the holidays only to find himself unable to tolerate the bloodlust of this popular pastime. According to the 5th-century bishop and church historian Theodoret, Telemachus cried out for the violence to stop but was stoned to death by the crowd. The Emperor Honorius heard about his courageous act and ordered an end to the games.

Some may question Telemachus. Was his action the only way to protest a tragic blood sport? The apostle Paul asked a similar question of himself: “And why stand we in jeopardy every hour?” (1 Cor. 15:30). In 2 Corinthians 11:22-33, he chronicled some of his travails for the love of Christ, many of which could have killed him. Had it all been worth it?

In Paul’s mind the matter was settled. Trading things that will soon come to an end for honor that will last forever is a good investment. In the resurrection, a life that has been lived in behalf of Christ and others is seed for an eternity we will never regret.

Give us courage, Father, to make and live by choices that show the difference the love of Jesus makes in our lives. Help us not to trade away eternal values for convenience and comfort.