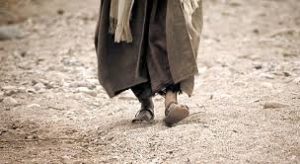 God wants you to be covered with dust.

Sounds weird, huh? Actually, it’s an ancient Jewish blessing that people would say young men chosen to be disciples. See, the idea was that they were supposed to mimic/follow their teacher/Rabbi so closely that they would end up covered in the dust from their sandals.

In the first century education was of upmost importance. The highest aim was to become a Rabbi, but it was a long and difficult process. Boys started studying at the synagogue by the age of five, all training, hoping, dreaming that one day they would be the teacher, the Rabbi.

At age fourteen, after nine years of studying, the best of the students would have the entire Old Testament memorized (first five books). Can you imagine? But fourteen was very important because this was the age that a boy could approach a Rabbi and ask to become their disciple. If the Rabbi thought they were smart enough, he would agree to an interview. During which time the Rabbi would grill the young teen on all the theology, often using what seemed like trick questions. If the boy was found fitting, the Rabbi would say they could be their disciple, after which time the boy would leave everything (family, home, any profession) and follow the Rabbi in every movement for the rest of his life. But the Rabbis were picky, they couldn’t accept someone they didn’t think couldn’t make it.

Sadly, not many boys got their dream. It was normal for a Rabbi to only choose one or two disciples. After which time, the rest of the boys would be told that they were done learning and needed to go home and learn their family trade.

Now comes the interesting stuff. Remember Jesus’ twelve disciples? They would have gone through this same education as children. At the age of fourteen they would have sought out the Rabbi they most wanted to be paired with. Know what? The Rabbi’s rejected all of the twelve. That’s why Jesus finds them fishing, banking, doctoring, and working in the law. See, the twelve had been told they weren’t good enough and had already been dismissed to go back to their family and find a job. They weren’t the best of the best. They were losers. Rejects.

When Jesus approaches Andrew and Simon/Peter on the shore and asked them to follow him, they toss down their nets immediately. Why? Because someone was finally telling them they were worth it. That they were wanted. These men were most likely in their late teens and early twenties, and thought their opportunity to follow a Rabbi was a ship long sailed.

Jesus is walking down the beach toward you. He asks you to follow his every move. Live exactly how He lived. Can you do it? He believes you can, or He wouldn’t ask you. He won’t reject you, in fact, He’s chosen you.

May you follow Christ so closely that you end up covered with the dust of his feet.