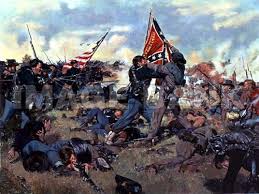 I Heard the Bells on
Christmas Day

I heard the bells on Christmas Day, their old familiar carols play—On Christmas Day, 1863, Henry Wadsworth Longfellow, wrote this poem. It was later set to music written by an Englishman, John Calkin, and soon became a favorite hymn in Europe and America.

After several years of great personal tragedy as well as despair over the Civil War that was tearing apart the country he loved, Longfellow wrote about the joys of the season. Then as he came to the third stanza he was stopped by the thought of the condition of his beloved country. The Civil War was in full swing. The Battle of Gettysburg was not more than six months past.  Days looked dark, and he probably asked himself the question, “How can the last phrase of those stanzas—peace on earth, good will to men—to be true in this war-torn country, where brother fights against brother and father against son?”

But he kept writing and . . . then, as every Christian should do, he turned his thoughts to the one who solves all problems.

The original poem included 2 stanzas that show his despair over the Civil War, but most versions today do not include them.