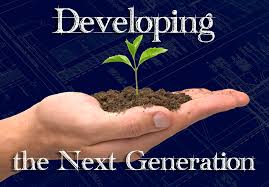 Skeptical about the usefulness of a small lunch, Andrew said to Jesus, “What are [these five loaves and two fish] among so many?” (John 6:9). Yet the little lunch in the hands of Jesus turned out to be a huge blessing. So, before you think that you don’t have much to offer Jesus, consider this:

Edward Kimball, a Sunday school teacher in Boston, decided to visit a young man in his class to be sure he was a Christian. That day he led that man, Dwight L. Moody, to the Lord.

Moody, the Billy Graham of the 19th century, had a major impact on Wilbur Chapman. Chapman, a prominent evangelist, recruited Billy Sunday to join in his evangelistic campaigns. In turn, Sunday launched a national ministry that had great results in cities like Charlotte, North Carolina. An organization that started as a result of Sunday’s revival invited evangelist Mordecai Ham to Charlotte. In one of those meetings, Billy Graham received Christ as his Savior and later became the most prominent evangelist of our time.

When you think you don’t have much to offer, remember Sunday school teacher Edward Kimball, who spent a Saturday afternoon reaching out to someone in his class. God has a special way of using routine faithfulness in the “small things” to accomplish great things!

Little is much when God is in it.