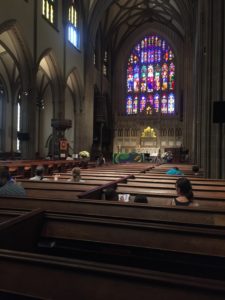 During the spring of 1904 a young Welshman named Evan Roberts was repeatedly awakened at 1:00 a.m. He met with God until 5:00 a.m. The Welsh revival followed. Churches were packed for prayer meetings. In a prayer meeting for young people, Pastor Joseph Jenkins asked for testimonies. A young girl named Florrie Evans, who had only been a believer a few days, rose and with a trembling voice said simply, “I love Jesus with all my heart.” The other young people’s hearts were melted. A powerful spiritual awakening that brought 100,000 people to Christ was under way.

On November 7th, 1904 Moraih Chapel was filled to capacity for a prayer meeting that lasted until 3:00 a.m. Soul winning spread through the coalmines. Profane swearing stopped. Even the miners’ horses were puzzled when their masters stopped cursing. Orders to the Bible Society “for Scriptures from Wales during November and December, were over three times the amount for the corresponding months of 1903…” The Times said this resulted from the Welsh revival, adding that this demand showed no sign of falling off.

“The mighty and unseen breath of the Spirit was doing in a month more than centuries of legislation could accomplish” the pastor of Saint John’s-Wood Presbyterian Church declared on Sunday, January 1st, 1905 according to the London Times.The Welsh revival “had a great effect” in healing spiritual carelessness among Christians and “the growing bitterness which has accentuated our unhappy divisions”, the Bishop of Bangor declared on January 2nd, 1905. He called “congregations to meet together often for united prayer.”

The Times added that “the religious revival in Wales continues…with unabated zeal.” Huge crowds were attending the meetings. Bible verses covered the doors down in the coalmines. “At Swansea the Poor Law guardians…dealt with revival cases in which people…have taken their parents from the workhouse. The Welsh revival movement has shown no sign of flagging…”, The Times pointed out on January 10th. Entire congregations were on their knees in fervent prayer and “for the first time there was not a single case of drunkenness at the Swansea Petty Sessions.”