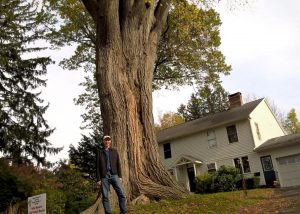 Po Bronson, in his book Why Do I Love These People? (Random House, 2005), tells a true story about a scarred and stately elm tree. The tree was planted in the first half of the 20th Century on a farm near Beulah, Michigan. It grew to be magnificent. Today the elm spans some 60 feet across its lush, green crown. Its trunk measures about 12 feet in circumference. And a vivid scar encircles the tree.

In the 1950s the family that owned the farm kept a bull chained to the elm. The bull paced round and round the tree. The heavy iron chain scraped a trench in the bark about three feet off the ground. The trench deepened over the years threatening to kill the tree. But though damaged so severely, the tree strangely did not die.

After some years the family sold the farm and took their bull. They cut the chain, leaving the loop embedded in the trunk and one link hanging down. The elm continued to grow and bark slowly covered parts of the rusting chain that strangled it. The deep gash around the trunk became an ugly scar.

Then one year agricultural catastrophe struck Michigan—in the form of Dutch Elm Disease. . . . . Most elm trees in the vicinity of the farm became infected and died. But that one noble elm remained untouched.

Amazingly, it had survived two hardships. It was not killed by the bull’s chain years earlier, and this time it out-lasted the deadly fungus. Year after year it thrived. Nobody could understand why it was still standing in a vast area where most every other elm tree was gone.

Plant pathologists from Michigan State University came out to study the tree. They looked closely at the chain necklace buried deep in the scar. These experts reported that the chain itself actually saved the elm’s life. They reasoned that the tree absorbed so much iron from the chain left to rust around its trunk that it became immune to the fungus. What certainly could have killed the tree actually made it stronger and more resilient.

As Ernest Hemingway said, “The world breaks everyone and afterward many are strong at the broken places.” The same chain that severely wounded the tree saved its life in the end.

The story of this tree reminds me that the very things that have hurt me, physically as well as emotionally, have also helped me more than I may ever know. Many of them left scars—some of the scars are visible and some not. But these days I am learning to accept my scars—even to celebrate them.

Why not? My scars remind me that I did indeed survive my deepest wounds. That in itself is an accomplishment. And they bring to mind something else, too. They remind me that the damage life has inflicted on me has, in many places, left me stronger and more resilient. What hurt me in the past has actually made me better equipped to face the present.

Yes, I have scars. I have decided to look on them as things of beauty. And I will celebrate them.

Used by permission of  Steve Goodier