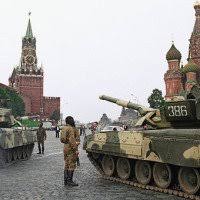 I remember watching television news reports in 1991 as the nonviolent revolution took place in the streets of Moscow. Russians who had grown up in totalitarianism suddenly declared, “We will act as if we are free,” taking to the streets and staring down tanks. The contrast between the faces of the leaders inside and the masses outside showed who was really afraid, and who was really free.

Watching the newsreels from Red Square on Finnish television, I came up with a new definition of faith: paranoia in reverse. A truly paranoid person organizes his or her life around a common perspective of fear. Anything that happens feeds that fear.

Faith works in reverse. A faithful person organizes his or her life around a common perspective of trust, not fear. Despite the apparent chaos of the present moment, God does reign. Regardless of how I may feel, I truly matter to a God of love.

What could happen if we in God’s kingdom truly acted as if the words of the apostle John were literally true: “He who is in you is greater than he who is in the world” (1 John 4:4). What if we really started living as if the most-repeated prayer in Christendom has actually been answered—that God’s will be done on earth as it is in heaven?