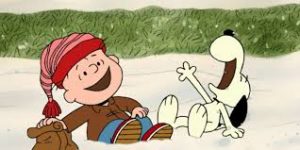 A Woman went to the Post Office to buy stamps for her Christmas cards.      “What Denomination?” Asked the clerk.    “Oh, good heavens! Have we come to this?” said the woman. “Well give me 50 Baptist and 50 Methodist ones.”

Two young boys were spending the night at their grandparents the week before Christmas. At bedtime, the two boys knelt beside their beds to say their prayers when the youngest one began praying at the top of his lungs. “I PRAY FOR A NEW BICYCLE…” “I PRAY FOR A NEW NINTENDO…” “I PRAY FOR A NEW STEREO…” His older brother leaned over and nudged the younger brother and said, “Why are you shouting your prayers? God isn’t deaf.” To which the little brother replied, “No, but Grandma is!”

A customer walked into our store looking for Christmas lights. I showed her our top brand, but, wanting to make sure each bulb worked, she asked me to take them out of the box and plug them in. I did, and each one lit up. “Great,” she said. I carefully placed the string of lights back in the box. But as I handed them to her, she looked alarmed. “I don’t want this box,” she said abruptly. “It’s been opened.”

James and Neil were fortunate enough to have a Falcon”s season ticket. They could not help noticing that there was always a spare seat next (A16) to them and they had a friend who would love to buy a season ticket, especially if all three could have seats together. One half-time Neil went to the ticket office and asked if they could buy the season ticket for A16. The official said that unfortunately the ticket had been sold. Nevertheless, week after week the seat was still empty.

Then on New Year’s Day, much to James and Neil’s amazement the seat was taken for the first time that season. Neil could not resist asking the newcomer, ‘Where have you been all season’. ‘Don’t ask’ he said, ‘the wife bought the season ticket back last summer, and kept it for a surprise Christmas present.’