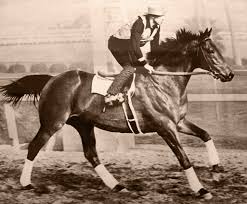 An American racing enthusiast entered his horse in a British steeplechase. Just before the race began, he slipped his horse a white pellet. The Duke of Marlborough, who was serving as steward, caught the owner in the act and objected. “I say, old man, really you can’t do that sort of thing over here.”

“Just a harmless sugar lump,” the American assured him. He gulped one down himself. “Here, try one,” he said.

The duke took a pill, swallowed it, and seemed satisfied. As his jockey mounted, the American whispered in his ear, “Son, keep that horse on the outside and stay out of trouble, because once he starts running, there ain’t nothing that can catch him…except me and the Duke of Marlborough!”

Do you ever feel that way – running so fast that nothing can catch you? We Americans are accused of living in fast time. And I think that much of the rest of the world can relate. How often do we rush here and hurry there? Or inhale our fast food? We have “just a minute” for friends. We even use words like “running an errand.” We rely on lightning speed e-mail and speak of the old system as “snail mail.”

We live in fast time. Too often, we run so fast we lose our center. Or we lament, “I wish I could, but I don’t have the time….”

How can that be? How can we live so fast and not have time?

An attorney, reflecting on his childhood, said that the greatest gift he ever received in his life was a note his father gave him on Christmas. It read, “Son, this year I will give you 365 hours. An hour every day after dinner. We’ll talk about whatever you want to talk about. We’ll go wherever you want to go, play whatever you want to play. It will be your hour.” That dad kept his promise and renewed it every year.

I call that slow time. It’s time that is not relentlessly measured by a clock. Slow time is time to be; time to experience life.

I gave my children a similar gift. I gave the gift of a breakfast out once a week. Just me and one of my sons. No agenda. No problem-solving. No scolding. Just listening. Talking about whatever he wanted to talk about. It became a time to learn about him, to laugh with him and to show him that, for the next hour or so, my time was his alone. It was the gift of slow time between a father and his son. And often it was the most important time I spent all day.

It’s important to find enough slow time. For in the end, it’s not how fast you and I live our lives that matters, or how much we accomplish in a day. Are you taking time to enjoy? Is there time to listen to a friend or visit a relative in need? Are you leaving time each day to nurture your soul?