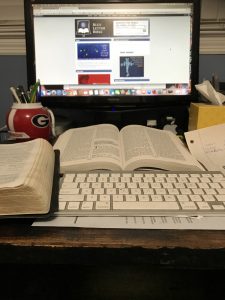 OBJECTIVES IN STUDYING THIS CHAPTER

2) To consider the vanity of skillful work, isolation, and popularity

3) To appreciate the value of friendship and working together

The writer continues to share his observations gleaned during the course of his search for the purpose of life under the sun.  Earlier he related the injustice he saw (cf. 3:16).  Now we are told how he considered those who were oppressed with no comforter.  In such a state, he concluded the dead were better than the living, and better than both was to never be born (1-4).

The writer then describes what he saw as the vanity of toil and skillful work, especially when one is alone.  While one who does  nothing is a fool and consumes his own flesh, it is better to have a  little with quietness than a lot with much toil.  A grave misfortune is the person with no companion, son, nor brother, who labors endlessly  for riches that do not satisfy and does not consider who will receive  that for which he deprives himself of much good in life.  On the other  hand, the writer saw great value in friendship.  He illustrates the  principle of synergy in their work and how they can help one another in times of need (5-12).

The chapter closes with an illustration of the vanity of popularity.   While a young and wise man who becomes king may be popular at first, with the passing of time he is not appreciated by those who come along  later (13-16).

A. WHAT THE PREACHER REVIEWED (1)

1. He considered the oppression done under the sun

2. He saw the tears of the oppressed, who had no comforter

3. He observed power on the side of the oppressors

1. He praised the dead more than the living

2. Better than both is the person who:

a. Has never existed

b. Has not seen the evil work done under the sun

1. He saw that toil and skillful labor is envied by others

2. This too is vanity and grasping for wind

1. The fool does nothing, and consumes his own flesh

2. It is better to have a little with quietness

1. He saw more vanity under the sun

2. A person who was alone, without companion, son, or brother

a. With no end to his labors, with no satisfaction with his riches

b. Who does not consider for whom he labors and deprives himself of good

3. This was vanity and a grave misfortune

1. Two are better than one, for they have good reward for their labor

2. If one falls, the other can lift him up

3. Their combined body heat can keep them warm

4. They can withstand one who would seek to overpower them

5. A threefold cord is not quickly broken

1. It is better to be a poor and wise youth, than an old and foolish king who will not accept criticism

2. For the young man, though born poor, comes out of prison to become king and the living were with him

B. YET POPULARITY IS SHORT-LIVED (16)

1. The young king might rule over a populous nation

2. But another generation will arise that will not rejoice in him