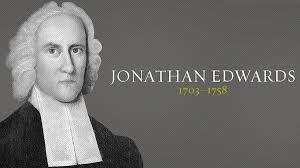 Jonathan Edwards stands as one of the dominant figures in 18th century American religion, a fiery revivalist preacher and a pioneer in the Reformed Church.

The fifth child of Rev. Timothy and Esther Edwards, Jonathan was the only boy in their family of 11 children. He was born in 1703 in East Windsor, Connecticut.

Edwards’ intellectual brilliance was evident from an early age. He started at Yale before he was 13 years old and graduated as valedictorian. Three years later he received his master’s degree.

At age 23, Jonathan Edwards succeeded his grandfather, Solomon Stoddard, as pastor of the church in Northampton, Massachusetts. At the time, it was the richest and most influential church in the colony, outside of Boston.

He married Sarah Pierpoint in 1727. Together they had three sons and eight daughters. Edwards was a key figure in the Great Awakening, a period of religious fervor in the middle of the 18th century. Not only did this movement bring people to the be born again, but it also influenced the framers of the Constitution, who ensured freedom of religion in the United States.

Jonathan Edwards gained fame for preaching the sovereignty of God, the depravity of humans, the immanent danger of hell, and the need for anew birth conversion. It was during this period that Edwards preached his most famous sermon,”Sinners in the Hands of an Angry God.” 1741.