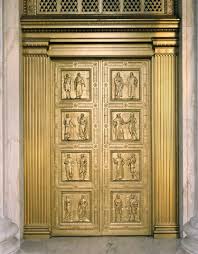 As you walk up the steps to the building which houses the U.S. Supreme Court you can see near the top of the building a row of the world’s law givers and each one is facing one in the middle who is facing forward with a full frontal view – it is Moses and he is holding the Ten Commandments!
As you enter the Supreme Court courtroom, the two huge oak doors have the Ten Commandments engraved on each lower portion of each door- As you sit inside the courtroom, you can see the wall, right above where the Supreme Court judges sit, a display of the Ten Commandments!-
There are Bible verses etched in stone all over the Federal Buildings and Monuments in Washington, D.C.-
James Madison, the fourth president, known as “The Father of Our Constitution” made the following statement “We have staked the whole of all our political institutions upon the capacity of mankind for self-government, upon the capacity of each and all of us to govern ourselves, to control ourselves, to sustain ourselves according to the Ten Commandments of God”
Patrick Henry, that patriot and Founding Father of our country said, “It cannot be emphasized too strongly or too often that this great nation was founded not by religionists but by Christians, not on religions but on the Gospel of Jesus Christ”- Every session of Congress begins with a prayer by a paid preacher, whose salary has been paid by the taxpayer since 1789
Fifty-two of the 55 founders of the Constitution were members of the established orthodox churches in the colonies-