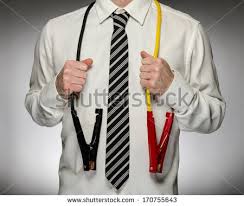 A guy goes into a upscale restaurant wearing a shirt open at the collar, but the bouncer tells him he needs a necktie to get in.

The guy doesn’t have a necktie handy, so goes out to his car and gets his jumper cables. He ties these around his neck, manages to fashion a fairly acceptable looking knot, and lets the ends dangle free.

He goes back to the lounge. The bouncer looks him up and down and then says, “Well, okay, I guess you can come in. Just don’t start anything.” —Adon Brownell]

A man went to apply for a job. After filling out all of his applications he waited anxiously for the outcome.

The employer read all his applications and said, “We have an opening for people like you.”

“An abstract noun,” the teacher said, “is something you can think of, but you can’t touch it. Can you give me an example of one?”

“Sure,” a teenage boy replied. “My father’s new car.” [by Gretchen Patti]

A guy told his friends: “I left my job because of illness and fatigue.”  Turns out, his boss got sick and tired of him.