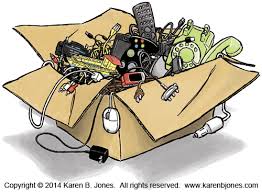 By Edgar A. Guest

My father often used to say:
“My boy don’t throw a thing away;
You’ll find a use for it some day.”

So in a box he stored up things,
Bent nails, old washers, pipes and rings,
And bolts and nuts and rusty springs.

Despite each blemish and each flaw,
Some use for everything he saw;
With things material, this was law.

And often when he’d work to do,
He searched the junk box through and through
And found old stuff as good as new.

And I have often thought since then,
That father did the same with men;
He knew he’d need their help again.

It seems to me he understood
That men, as well as iron and wood,
May broken be and still be good.

Despite the vices he’d display
He never threw a man away,
But kept him for another day.

A human junk box is this earth
And into it we’re tossed at birth,
To wait the day we’ll be of worth.

Though bent and twisted, weak of will,
And full of flaws and lacking skill,
Some service each can render still.