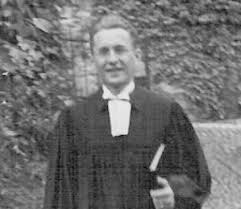 Dietrich Bonhoeffer (1906-1945) was born in Germany to parents who rarely took their children to church. When, at age 14, he declared his intent to become a theologian and pastor, his parents were dismayed. According to Mark Devine in Bonhoeffer Speaks Today, Dietrich’s brother called the church a “poor, feeble, boring, petty, bourgeois institution” — to which Dietrich replied, “If what you say is true, I shall reform it!”

At 21, Bonhoeffer earned a doctorate in theology. Too young for ordination, he attended Union Theological Seminary in New York and gained sympathy for oppressed people. Bonhoeffer returned to Germany and was ordained at age 25.

Opposed to Hitler’s rule from its start, Bonhoeffer helped form the Confessing Church in resistance to Nazi persecution of Jews.

On Sunday April 8, 1945, he had just finished conducting a service of worship at Schoenberg, when two soldiers came in, saying, “Prisoner Bonhoeffer, make ready and come with us,” the standard summons to a condemned prisoner. As he left, he said to another prisoner, “This is the end—but for me, the beginning—of life.” He was hanged the next day, less than a week before the Allies reached the camp.