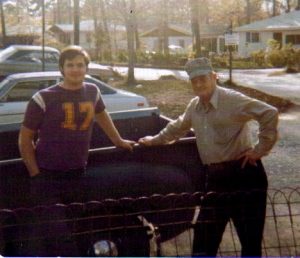 My Dad worked for many years at the National Iron and Metal Company on Decatur Street in Atlanta. The main business was buying recyclable metals, most where things had been torn down and the metal removed and sold. No whole cars but a lot of car parts and a lot of steel beams. The real money was made across the street where they stored the good stuff, copper, brass and aluminum. Daddy worked everyday but Sunday and rarely took any vacation time or extra time off. But on Saturday he worked from 8-12, so he would let one of us kids go with him sometimes. The way he decided who would go was if you were up, dressed and had breakfast when he was ready to leave. Most of us would sleep in at least until 8 on Saturdays. O’yea you had to be eight years old to go the first time. All the boys looked forward to these trips if more than one got up then they had to pick which one would stay home, so they took turns. Many Saturdays no one was awake and dressed when he left to work so no one got to go. Then I turned eight. Every Saturday morning I got up and ready to go with Dad, I went a lot. If one of the other boys got up then they went, but just in case they all over slept I was ready.
I enjoyed the ride with my Dad and just me and noticing how he seemed different when you could spend a little one on one time together. I was the baby boy of the family so after the others got to “big” to go to work with Dad I went often.
Many years have passed since those rides to work with Dad but the memories will last all my life. One of the things I learned on those cool Saturday mornings was a special time when I got alone with my Dad I was able to talk to him about thing I never would have otherwise.
Maybe we need to put the same effort into getting up to spend time with our Heavenly Father. It will surprise you how much you can learn about Him when you just seat and talk and listen. The old song by Austin Miles, In The Garden, says it just right.

I come to the garden alone
While the dew is still on the roses
And the voice I hear falling on my ear
The Son of God discloses.
Refrain
And He walks with me, and He talks with me,
And He tells me I am His own;
And the joy we share as we tarry there,
None other has ever known.

He speaks, and the sound of His voice,
Is so sweet the birds hush their singing,
And the melody that He gave to me
Within my heart is ringing.
Refrain
I’d stay in the garden with Him
Though the night around me be falling,
But He bids me go; through the voice of woe
His voice to me is calling.