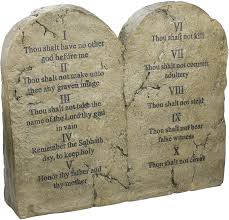 The most obvious and striking division of the Word of truth is that between law and grace. Indeed, these contrasting principles characterize the two most important dispensations: the Jewish and Christian. “For the law was given by Moses, but grace and truth came by Jesus Christ” (John 1:17).

It is not, of course, meant that there was no law before Moses, any more than that there was no grace and truth before Jesus Christ. The forbidding to Adam of the fruit of the tree of the knowledge of good and evil (Gen. 2:17) was law, and surely grace was most sweetly manifested in the Lord God seeking His sinning creatures and in His clothing them with coats of skins (Gen. 3:21)-a beautiful type of Christ who “is made unto us . . . righteousness” (1 Cor. 1:30). Law, in the sense of some revelation of God’s will, and grace, in the sense of some revelation of God’s goodness, have always existed, and to this Scripture abundantly testifies. But “the law” most frequently mentioned in Scripture was given by Moses, and from Sinai to Calvary, dominates, characterizes, the time; just as grace dominates or gives its peculiar character to the dispensation which begins at Calvary and has its predicted termination in the rapture of the church.

It is, however, of the most vital moment to observe that Scripture never, in any dispensation, mingles these two principles. Law always has a place and work distinct and wholly diverse from that of grace. Law is God prohibiting and requiring; grace is God beseeching and bestowing. Law is a ministry of condemnation; grace, of forgiveness. Law curses; grace redeems from that curse. Law kills; grace makes alive. Law shuts every mouth before God; grace opens every mouth to praise Him. Law puts a great and guilty distance between man and God; grace makes guilty man nigh to God. Law says, ‘An eye for an eye, and a tooth for a tooth”; grace says, “Resist not evil: but whosoever shall smite thee on thy right cheek, turn to him the other also.” Law says, “Hate thine enemy”; grace says, “Love your enemies, bless them that despitefully use you.” Law says, do and live; grace says, believe and live. Law never had a missionary; grace is to be preached to every creature. Law utterly condemns the best man; grace freely justifies the worst (Luke 23:43; Rom. 5:8; 1 Tim 1:15; 1 Cor. 6:9-11). Law is a system of probation; grace, of favor. Law stones an adulteress; grace says, “Neither do I condemn thee: go, and sin no more.” Under law the sheep dies for the shepherd: under grace the Shepherd dies for the sheep.

Everywhere the Scriptures present law and grace in sharply contrasted spheres. The mingling of them in much of the current teaching of the day spoils both, for law is robbed of its terror, and grace of its freeness.

Three errors have troubled the church concerning the right relation of law to grace:

1. Antinomianism- the denial of all rule over the lives of believers; the affirmation that men are not required to live holy lives because they are saved by God’s free grace, “They profess that they know God; but in works they deny him, being abominable, and disobedient, and unto every good work reprobate” (Titus 1: 16).

“For there are certain men crept in unawares, who were before of old ordained to this condemnation; ungodly men, turning the grace of our God into lasciviousness, and denying the only Lord God, and our Lord Jesus Christ” (Jude verse 4).

2. Ceremonialism- the demand that believers should observe the levitical ordinances. The modern form of this error is the teaching that Christian ordinances are essential to salvation.

“And certain men which came down from Judaea taught the brethren, and said, Except ye be circumcised after the manner of Moses, ye cannot be saved” (Acts 15:1).

3. Galatianism – the mingling of law and grace; the teaching that justification is partly by grace, partly by law, or, that grace is given to enable an otherwise helpless sinner to keep the law. Against this error, the most wide-spread of all, the solemn warnings, the. unanswerable logic, the emphatic declarations of the Epistle to the Galatians are God’s conclusive answer.

“This only would I learn of you, Received ye the Spirit by the works of the law, or by the hearing of faith? Are ye so foolish? having begun in the Spirit, are ye now made perfect by the flesh?” (Gal. 3:2- 3).

“I marvel that ye are so soon removed from him that called you into the grace of Christ unto another gospel: which is not another [there could not be another gospel]; but there be some that trouble you, and would pervert the gospel of Christ. But though we, or an angel from heaven, preach any other gospel unto you than that which we have preached unto you, let him be accursed” (Gal. 1:6-8).

The following may be helpful as an outline of Scripture teaching on this important subject. The moral law only is referred to in the passages cited.

WHAT THE LAW IS

THE LAWFUL USE OF THE LAW

“Therefore by the deeds of the law there shall no flesh be justified in his sight: for by the law is the knowledge of sin” (Rom. 3:20).

“Wherefore then serveth the law? It was added because Of transgressions” (Gal. 3:19).

“Now we know, that what things soever the law saith, it saith to them who are under the law; that every mouth may be stopped, and all the world may become guilty before God” (Rom. 3:19). Law has but one language: “what things soever.” It speaks only to condemn.

“For as many as are of the works of the law are under the curse: for it is written, Cursed is every one that continueth not in all things which are written in the book of the law to do them” (Gal. 3: 10).

“For whosoever shall keep the whole law, and yet offend in one point, he is guilty of all” (James 2:10).

WHAT THE LAW CANNOT DO

“Therefore by the deeds of the law there shall no flesh be justified in his sight: for by the law is the knowledge of sin” (Rom. 3:20).

“I do not frustrate the grace of God: for if righteousness come by the law, then Christ is dead in vain” (Gal. 2:21).

“For what the law could not do, in that it was weak through the flesh, God, sending his own Son in the likeness of sinful flesh, and for sin, condemned sin in the flesh” (Rom. 8:3).

ark 16:3 And they said among themselves, Who shall roll us away the stone from the door of the sepulchre?

4 And when they looked, they saw that the stone was rolled away: for it was very great.

5 And entering into the sepulchre, they saw a young man sitting on the right side, clothed in a long white garment; and they were affrighted.

6 And he saith unto them, Be not affrighted: Ye seek Jesus of Nazareth, which was crucified: he is risen; he is not here: behold the place where they laid him.

7 But go your way, tell his disciples and Peter that he goeth before you into Galilee: there shall ye see him, as he said unto you.