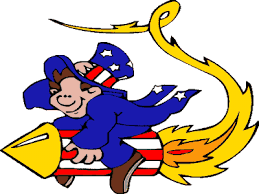 The Fourth of July weekend was approaching, and Miss Pelham, the nursery school teacher, took the opportunity to tell her class about patriotism. ‘We live in a great country,’ she announced. ‘One of the things we should be happy is that, in this country, we are all free.’

Trevor, who was a little boy in her class, came walking up to her from the back of the room. He stood with his hands on his hips and said loudly, ‘I’m not free. I’m four.’

There was one little boy in the teacher’s class who really struggled to learn.

One day the teacher asked him who signed the Declaration of Independence, and of course he didn’t know.

The teacher asked him every day for a week but still he couldn’t give the right answer.

Finally, in desperation, she called the boy’s father to come and see her. She said to him, “Your boy won’t tell me who signed the Declaration of Independence.”

The father said to his son, “Come here, boy, and sit down.”

The boy duly did as he was told and then his dad said to him, “Now if you signed that thing, just admit it so we can get out of here.”

Why does the Statue of Liberty stand in New York harbor?

Because she can’t sit down.

Where was the Declaration of Independence signed?

Why are there no knock knock jokes about America?