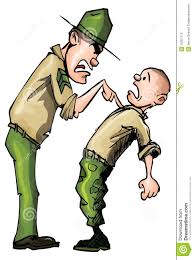 “I am going to cut you down to size!” If I heard that once during the ten weeks I spent in a U.S. Marine Corps boot camp more than forty-five years ago, I must have heard it a dozen times. As I recall, those words formed the theme of the opening speech, delivered with passion, by a man I quickly learned to obey. Those words still play back to me in my mind, and the shrill tone of my drill instructor’s voice remains a vivid memory. He meant every word he said, and he kept his promise.

There we stood, an unorganized, ragtag bunch of seventy or so young men of every conceivable size and background, thrown together in a strange place, having no idea (thankfully) what was ahead of us. During the months that followed, every shred of self-sufficient arrogance, every hint of independent spirit, and all thought of rebellion was scraped away. Any indifference toward authority was replaced by a firm commitment to do only as we were told, regardless. We learned to survive in the crucible of intense, extreme training that has characterized the Marine Corps throughout its proud and proven history.

The disciplined regimen of boot camp—day after day, week after week—brought about remarkable changes in each one of us. As a result, we left that place completely different than we were when we arrived. The isolation of our location, the absence of all creature comforts, the relentless, monotonous drills and demanding repetition of inspections, the tests that forced us to encounter the unknown without showing fear (all mixed with the maddening determination and constant harassment of our drill instructor), yielded powerful dividends. Almost without realizing it, while learning to submit ourselves to the commands of our leader, we ultimately found ourselves physically fit, emotionally stirred, and mentally ready for whatever conflict might come our way, even the harsh reality of facing the enemy in combat.

That kind of raw recruit training is precisely what the Lord had in mind when He sent His servant Elijah from the court of King Ahab to the brook Cherith. Little did the prophet know that his being hidden away at Cherith would prove to be his boot camp experience. There, he would be trained to trust his Leader so that he might ultimately do battle with a treacherous enemy.

Feel like you’re in God’s boot camp? It’s okay. He is training you for battle.