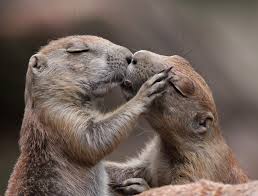 I read that an insurance company survey revealed that spouses who habitually kiss their mates in the morning are projected to live longer than those who don’t. It also indicated that these people may have fewer auto accidents and lose less time at work due to illness. I won’t begin to interpret what all this means, except that it seems that people in intimate relationships seem to be happier and healthier.

But what about that “touching moment”–that kiss or a tender hug? If intimacy is vital, is the simple act of touching another person also important?

I once was asked to give some emotional support to a prisoner who was awaiting trial. I found him in the county jail and he and I visited for a while in a prison conference room. He didn’t know me and seemed afraid to let down his defenses. So we talked about nothing more important than how long he may be incarcerated and whether or not he was guilty of the crimes with which he was charged. He shared nothing of his fears at this dark time in his life. I felt as if we had not “connected” in any meaningful way and, after an appropriate length of time, I stood to leave.

On impulse, before I turned away from him I reached for his hands. He grasped mine tightly and dropped his head. Neither of us spoke – we just stood facing each other clasping hands. After a moment, he began to cry. As he sobbed, he continued to hold tightly to my hands. Somehow the connection, the human touch, melted a dam of ice and allowed his emotions to gush forth.

When his sobbing subsided, he wanted to talk. Only this time he spoke of his fear and loneliness and he told me of his concern for his family while he was imprisoned. All the while, he held onto my hands like a drowning man clinging to a life saver. I believe that because of the touch, an act of basic human contact, he felt safe enough to share deeply.

There is power in a caring touch. I knew a woman who went to a massage therapist once a week, even when she felt fine, just because she needed that dose of physical contact. The lack of touch can be one of our greatest impediments to emotional intimacy and happiness.

When film star Marilyn Monroe was asked if she ever felt loved by any of the foster families with whom she lived, she replied, “Once, when I was about seven or eight. The woman I was living with was putting on makeup, and I was watching her. She was in a happy mood, so she reached over and patted my cheeks with her rouge puff—for that moment, I felt loved by her.”

Maybe you are in need of more closeness. And perhaps you know of those who are hungry for some assurance that they are loved by someone and not all alone in this world. Your touch may accomplish what your words can’t. And those touching moments can change a life.