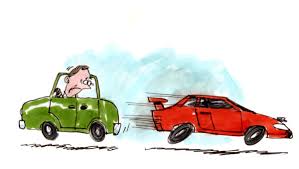 Eddie was driving down the road and met a car coming the other way.

Although there was room to pass easily, Eddie forced the oncoming car to slow down and wound down his window and shouted ‘Pig’.

Astonished, the other driver looked in his rear view mirror and swore at Eddie.

Then his car hit the pig

A blonde walks into a bank in central New York City and asks for the loan officer. She says she’s going to Europe on business for two weeks and needs to borrow $5,000.

The bank officer says the bank will need some kind of security for the loan, so the blonde hands over the keys to a new Rolls Royce. The car is parked on the street in front of the bank; she has the title and everything checks out.

The bank agrees to accept the car as collateral for the loan. The bank’s president and its officers all enjoy a good laugh at the blonde for using a $250,000 Rolls as collateral against a $5,000 loan. An employee of the bank then proceeds to drive the Rolls into the bank’s underground garage and parks it there.

Two weeks later, the blonde returns, repays the $5,000 and the interest which comes to $55.41. The loan officer says, “Miss, we are very happy to have had your business, and this transaction has worked out very nicely, but we are a little puzzled. While you were away, we checked you out and found that you are a multimillionaire. What puzzles us is, why would you bother to borrow $5,000?”

The blonde replies, “Where else in central New York City can I park my Rolls for two weeks for only $55.41 and expect it to be there when I return?”

A truck with two truckers was had just passed through small town and was driving on the back roads on the way to a slightly bigger town when they came to a covered bridge with a sign that read:

“What do you think?” the passenger trucker asked the driver.

The driver looked around carefully, got in the truck and thin shifted into first as he said, “Well, there’s not a cop in sight. Let’s take a chance!”