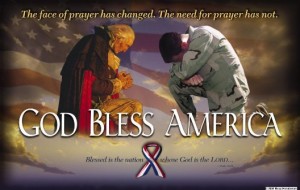 Romans 8:36 – As it is written, For thy sake we are killed all the day long; we are accounted as sheep for the slaughter. (KJV)

Many years ago, a paramedic showed me a soldier’s knapsack Bible. It belonged to his uncle, who had been killed in World War I. The Bible, along with his other possessions, had been returned to his grieving family. As they looked through the Bible, they discovered these words from Romans were underlined in pencil: “For thy sake we are killed all the day long; we are accounted as sheep for the slaughter.” They seemed to describe the young man’s horrifying experiences of trench warfare.

Alec, the paramedic, felt as though his young uncle was speaking to him beyond the grave, letting him know that his death at the Somme was a sacrifice for the freedom of the people back home. But his message didn’t end there. Verses 38 to 39 were double underlined, revealing the young soldier’s faith, which death could not diminish nor destroy.

Romans 8:38-39 – For I am persuaded, that neither death, nor life, nor angels, nor principalities, nor powers, nor things present, nor things to come, nor height, nor depth, nor any other creature, shall be able to separate us from the love of God, which is in Christ Jesus our Lord. (KJV)

In the midst of all our carefree leisure, happy pursuits, and personal freedom, does our faith match up to that of the young soldier?

Prayer: Lord Jesus, nothing can ever separate us from You, but sometimes we take that for granted. Remind us of Your sacrifice, Your loss, Your passion that has given us this wonderful opportunity to live beyond death, to hope above adversity, to have faith in the face of danger and trouble. In Your Holy Name we pray. Amen.