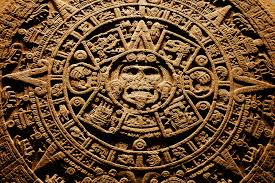 Doomsday might have already passed.  As you may know, the Mayan calendar predicted the end of the world on December 21, 2012.  However, as Time reports today, scholars who converted the Mayan calendar to our Gregorian calendar may have made a mistake.  Apparently no one knows what date the Mayans actually predicted, meaning that doomsday may have already come and gone. If you are reading this on the internet, then i guess that the end of the internet did not happen at midnight.
Before you begin planning your weekend, however, you might want to remember that 1999 RQ36 is still lurking out there.  When astronomers discovered this massive asteroid in 1999, they determined that it could be on a collision course with Earth.  The bad news is that scientists say it will take 100 years to prepare a strategy for diverting or destroying the asteroid.  The good news is that there’s only a one-in-one thousand chance that it will strike our planet before the year 2200.  I’ll be 250 years old by then, and probably ready for a change anyway. Plus it will be more than double my goal of 103 years old.
It’s an unpredictable world out there.  Today’s Dallas Morning News tells us how to respond to a tree which falls onto your house or car (insurance will cover the damages, no matter whose tree caused them).
While life seems faster than ever, scientists have determined that our planet is actually slowing down, spinning more slowly with each passing day.  In a mere 200 million years, your Thursday will have 25 hours in it; in 400 million years, you’ll have 26 hours in a day.  Just think what you’ll be able to do with the extra time.
In the meanwhile, we need peace in chaotic days.  We’re not the first.  Travel with me back 20 centuries to join Jesus and his disciples as they row across the Sea of Galilee.  Suddenly a furious storm came up, and the waves broke over the boat, so that it was about to sink.  The men woke Jesus, who “rebuked the wind” and spoke at the waves, “Peace!  Be still!.”  Instantly the wind died down and it was completely calm.
This story is in the Bible, not for those who experienced it (they would never forget it), but for us.  It’s there to teach us that when your next storm comes up, the right thing to do is to go to Jesus immediately.  Don’t trust your boat, or your sailing experience, or the other fishermen.  Don’t accept storms as a way of life.  Don’t give up on God—he’s waiting to redeem your storm for his glory and your good.