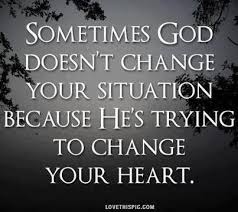 You may have seen the television commercial (I believe it’s for insurance) in which a young man tells his friends, “I’m never getting married!” But then he does. Then he says, “We’re never having children!” “We’re never moving to the suburbs!” “We’ll never own a mini-van!” “We’re never having another child!” Each time his “never” changes into a reality in his life. The last scene of the commercial shows him, his wife, and two children snuggled together on the couch—and he’s perfectly content.

Therefore, if any man be in Christ, he is a new creature:
old things are passed away; behold, all things are become new.
—2 Corinthians 5:17

The world says that all we need to do is be decent, respectable, and reasonable. True, that is all one needs to do to be a member of the Great Society, but to be a member of the Kingdom of God, there must be an inner change. A Communist in Hyde Park, London, pointed to a tramp and said, “Communism will put a new suit on that man.” A Christian standing nearby said, “Yes, but Christ will put a new man in that suit!”