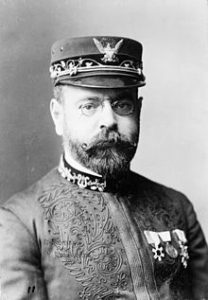 Often called “The March King,” composer and band director John Philip Sousa created music that has been played by bands around the world for more than a hundred years. Among his best-known marches are “Stars and Strips Forever”.  As Loras John Schissel, music historian and conductor of the Virginia Grand Military Band, said, “Sousa is to marches what Beethoven is to symphonies.” Sousa understood the power of music to motivate, encourage, and inspire people.

In Old Testament times, the people of Israel were often inspired to compose and sing songs to celebrate God’s help during times of need. When the Lord saved His people from certain destruction by Pharaoh’s army, “Moses and the children of Israel sang this song to the Lord . . . ‘I will sing to the Lord, for He has triumphed gloriously! The horse and its rider He has thrown into the sea! The Lord is my strength and song, and He has become my salvation’?” (Ex. 15:1-2).

Music has the power to lift our spirits by reminding us of God’s faithfulness in the past. When we’re discouraged, we can sing songs and hymns that raise our eyes from the challenging circumstances we face to see the power and presence of the Lord. We are reminded that He is our strength, our song, and our salvation.

Trust in Him, ye saints, forever—

He is faithful, changing never;

Neither force nor guile can sever

Those He loves from Him. —Kelly

Songs of praise raise our eyes to see God’s faithfulness.