Monkey Business, The day a monkey bite me 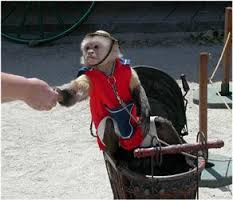 When I was fourteen a new family moved into the house next door. The man was a race car driver and kept his hot rod under the carport. I am not sure what type of car it was except he took it to the drag strip to race. It ran on nitro and had the big wide tires on the back and little narrow ones up front. But that’s another story, he also had a pet monkey.

At first he kept the monkey a secret, but it did not take to long for a bunch of kids find out about the monkey. As the months passed by he started to let us take the monkey out in the back yard. He even put the monkey on a lease attached to a cable, so the monkey could stay out side alone for a little while. My mother told us not to get around the monkey unless the owner was near by. We did not do to good about obeying her rule and would get caught many times playing with the monkey. Normally the monkey was very friendly and easy going, but it did not like crowds.

One day, several of us was playing around with the monkey. I was holding it and my little nephew pulled it’s tail. The monkey grabbed my hand and bite it. I started screaming, “Get this monkey off of me!” The owner came out and took the monkey in the house and then took me to my mother. She was not too happy. I was okay, after a trip to the hospital and about two more weeks of shots. Finally, I understood why she did not want us to be playing with the monkey unless the owner was close by, a lesson learned at a high cost.

Today many people are playing around with sin. Just because nothing bad happened to them, this time, they begin to think they are safe. But rest assured that we can not sin and get by with it. The Bible says be sure your sins will find you out.