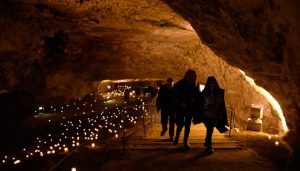 As a boy, Robert Louis Stevenson was intrigued by the work of the old lamplighter who went about with a ladder and a torch, setting the street lights ablaze for the night. One evening in Edinburgh, Scotland, as young Robert stood watching with childish fascination, his parents heard him exclaim, “Look, look! There is a man out there punching holes in the darkness!”

With one statement of childish wonder, Robert Louis Stevenson summed up the life of the Lord Jesus Christ. Jesus came into this world and accomplished many great and miraculous wonders, yet His primary purpose was to punch great gaping holes in the spiritual darkness that shrouded this world. He came to be The Light Of The World, v. 5.

Notice three great truths from this passage that reveal Jesus as The Light Of The World.

A. V. 1 His Blindness – This man, according to the Scripture was born blind. To my way of thinking, this would be one of the most horrible of physical handicaps. To never see a sunset, the face of a child, the face of a loved one would be a terrible thing. Yet, this man had lived his entire life in this state of darkness.

May I say that there is a blindness that is far worse than having sightless eyes? It is far worse to be in spiritual darkness. And, that is the place where the entire world, apart from Jesus, finds itself –

2 Cor. 4:4 ”In whom the god of this world hath blinded the minds of them which believe not, lest the light of the glorious gospel of Christ, who is the image of God, should shine unto them.”

B. V. 2-3 His Birth – The Scriptures seem to indicate that this man was born not only handicapped, but also in poverty. His birth seems to be a thing of terrible misfortune. Many would say that he would have been better off if he had never been born. However, we find that Jesus felt otherwise. He tells the Disciples that this man’s handicap was allowed by God so that God could get glory from this man’s life.

What a wonderful truth! Men need to realize that God can take any life regardless of how that life has been ruined by sin, save it by His grace and turn it into a thing of endless blessing and joy! After all, man’s purpose is to fellowship with and to glorify God – Isa. 43:7”Even every one that is called by my name: for I have created him for my glory, I have formed him; yea, I have made him.”. Jesus specializes in salvaging old, wasted lives – 2 Cor. 5:17.

B. V. 8 His Begging – This man was unable to find employment and as a result he was reduced to begging for what food and money he received. This is a pitiful state in which to be. This was no rich man, it would even appear that his parents were not all that interested in his well being – v. 20-22. This is a picture of absolute poverty.

This is the same situation every lost sinner finds himself/herself in today. Spiritually speaking, apart from Jesus, you are hopelessly bankrupt and have no way of providing the things you need on a spiritual level. Oh, men try to satisfy the spiritual itch that resides in their soul. They seek to do this through drugs, alcohol, illicit sex, etc. However, these are only forms of begging. True spiritual peace will be found nowhere else but in the person of the Lord Jesus Christ. He endured poverty that you and I might be made rich in Him, 2 Cor. 8:9 “For ye know the grace of our Lord Jesus Christ, that, though he was rich, yet for your sakes he became poor, that ye through his poverty might be rich.” Jesus endured great spiritual, as well as physical poverty, so that you and I might enjoy the richest of the Lord’s great spiritual blessings. (I.e. Salvation. Eternal life, Heaven, Holy Spirit, Adoption, etc.)

I. The Misery Of A Sightless Man

A. He Was Exposed To The Light – When Jesus passed by, this man’s life was forever changed. Jesus, first, healed him of his physical handicap. After Jesus exposed the man to the physical light, he began to lead him through a series of events that brought him face to face with who Jesus really is. Being able to see with these physical eyes is never enough. We must also come to the place where are able to see spiritual truth. That is what Jesus did notice the progression this man went through as the light began to dawn in him life.

1. V. 10-12 A Man Who Is Called Jesus – When the people asked this man who had healed him, all he knew was that it was some fellow named Jesus. It could have been any a thousand men, just some guy named Jesus.

2. V. 13-17 He Is A Prophet – When the Pharisees heard of the miracle, they called the blind man to them and tried to get to the bottom of the thing. Some of them were upset that Jesus had done this miracle on the Sabbath day. They concluded that if He would do something considered to be work on the Sabbath, then he must be a sinner. They asked the fellow that had been blind and he said that Jesus was “a Prophet.” In other words, “He is a man to be listened to.” This man had listened to Jesus once and that obedience had resulted in his healing. Therefore, he concludes that Jesus is worthy of being listened to.

3. V. 18-33 He Is A Man Of God – Through a series of questions by the Pharisees and some pretty good preaching on the part of this man, he arises at the conclusion that Jesus is a man of God. That is, He is a man to be followed. He even asks the Pharisees if they would like to follow Him also. He has come to believe that Jesus is a great man, One who is working and speaking for God.

4. V. 34-38 He Is The Son Of God – Finally, Jesus comes to the man personally and when He does, He reveals His true identity to this man. At this point, the man confesses Jesus to be the Son of God and is gloriously saved. This man had progressed from seeing Jesus as one among many, or one to be listened to, or one to be followed. He now sees Jesus as one who is worthy of faith and worship. He sees Him for who He truly is!

B. V. 34 He Was Expelled By The Leaders – When this man refused to bow to the pressure from the religious leaders, he was cast out of their synagogue. To us, this may not seem like a big thing, but to the Jews, it was devastating. However, this man had probably been rejected by religion for a long time anyway due to his handicap.

I. The Misery Of A Sightless Man

II. The Ministry Of A Sovereign Master

III. THE MESSAGE OF A SUPERNATURAL MIRACLE

A. V. 5 Jesus Is A Shining Light – When He walked upon this earth, Jesus was in the business of delivering men from darkness. May I say that He is still doing that today? If you have never been saved, you can come to Jesus today and He will bring you out of the darkness and the bondage in which you find yourself. He is still a Shining Light and a Savior to all who will come to Him – Matt. 11:28; Rev. 22:17.

B. V. 35 Jesus Is A Seeking Light – After this man had been cast out by the Jews, Jesus went looking for Him. This is why He came – Luke 19:10. It may the case with you that religion wouldn’t have you, many churches wouldn’t want to be around you and most people wouldn’t have anything to do with you, but let me tell you that Jesus Christ loves you just like you are and will save you by His grace if you will only come to Him by faith and ask Him. (Ill. He is still seeking souls to save this morning!)

C. V. 38 Jesus Is A Saving Light – When this man bowed and received Jesus, I am sure that he forgot about the days of blindness and the pain of being removed from the Synagogue. When he called on the name of Jesus, He was eternally saved and received into a family from which he will never be removed! Always remember, that what God does in saving the sinner is a forever work? John 10:28-29; 1 Pet. 1:5